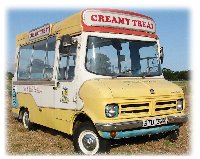 We had quite a challenge organizing, finding, and just transporting our “gear”. Everything from tools to sleeping bags to cook stoves to parts for the ICV.

Since the ICV was built in 1971 as a “converted vehicle” chassis (which means it was a set of wheels, engine, and front cab) – then modified by an unkown Ice Cream Van converting company – you can imagine what finding such non-essential parts like brakes are. We spent considerable time either hanging out at auto parts stores in Yeovil, or traveling between them, and digging thru countless vehicles at the “scrapheaps” (junkyards in the US).

Transporting about 300 lbs of tools was no easy chore either. John managed to figure out the jigsaw puzzle of fitting it all into luggage that would be under the weight limits of the airlines. We managed to avoid all but one of the excess baggage fees and that one was probably due to the ticket agent burning her toast at breakfast that day.

Finding things in rural England is a bit of a challenge in itself. Something as simple as a camping stove is a bit like a scavenger hunt. You cannot carry a camp stove on the airlines if it’s been used and we were unsure of what types of fuel they sold cheaply and readily – so we decided to buy one locally. It is a process of elimination, sort of, you go to a store you think has it and when they say “no, very sorry” in that ever so polite British “what, are you mad!?” fashion – you ask them where you can find one. The Brit’s are a helpful and courteous lot if nothing else. If you ask one of these folks for help, it’s usually a signal for them to fall all over themselves to help you out – even if they haven’t a clue what they are talking about. So, they will usually send you off to a store or place that has maybe a 50/50 chance of even carrying something close to what you’re asking for. Of course, it may be that dealing with a rude American lends one to be polite and courteous but send him packing in the wrong direction?